The advantage of gliding/soaring as a sport is for me that it gives me time to think things over when I’m up in the mountains. I realized today that it is exactly 35 years ago that I got my wings as a Belgian Flight Cadet at the airfield of Oostmalle in Belgium. Here’s a picture of me with my (proud) father and my mother back in 1979 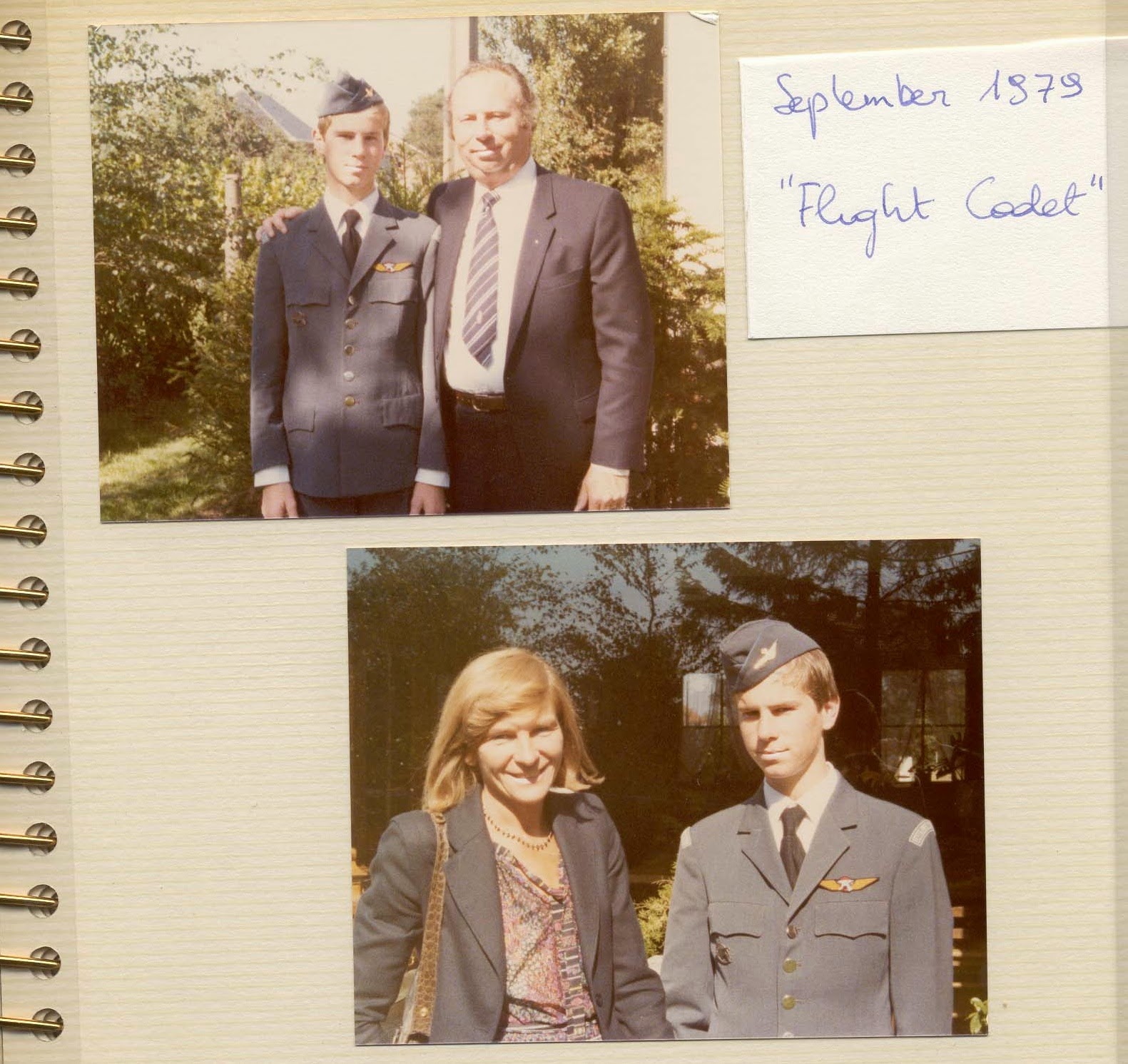 And here’s a selfie of 35 years later. Flying a glider still gives me the same excitement as in the time I was a kid. I’m very gratefull to my parents that they sent me to the Belgian Air Cadets in the late 70’s, where I learned to fly.

On my third gliding day of the season, I teamed upon again with Jean Magne for a flight through the Southern Alps. Although the flight as such was nice (we followed a more western path), I had serious pain in my back (kidneys) all the flight long. Not very pleasant to say the least..especially if a flight takes many hours and I can’t move.

The flying as such was also way more difficult. We had a VERY hard time getting out the local area at Fayence. The Mount Lachens and even the barre de Seranon seemed invincible. Thanks to Jean’s life spanning experience, we succeeded anyway to get into the mountains, but we we have been struggling all the time. 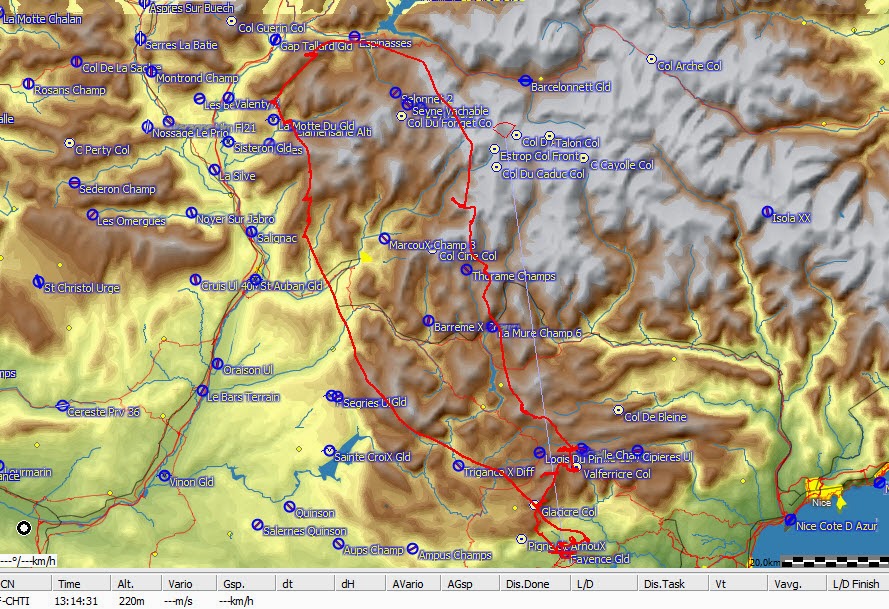 What should have become a local flight today (my first solo gliding flight since a year) turned out to become a very special flying adventure.
I booked an (old) K-6 glider for the day here in Fayence, France. At the briefing, I learned that weather outlook for the day was excellent. I put my glider out, but had to return at my house as I noticed as Ihad some business work to care of. So, it turned out to be 2pm when I took off at LFMF
The plan was to make a local flight, to refreshen my flying skills. This year, I celebrate to be a glider pilot for 35 years. Immediately after releasing the cable from the towing plane , I found a strong updraft: 5 meters/sec !
I flew north, to the Malay mountain and to the Mont Lachens, to the limits of what is called a local circuit. Weather was so nice today. I called Jean Magne, my 83 year old and wise instructor I have been doing my annual check with yesterday and asked him if I could leave the local area. He agreed and so I flex to the Teillion mountain in the north. I continued climbing.
I called Jean again and asked if he agreed that I continue my journey and fly to the Pic de Chamatte mountain. He agreed. 10 minutes later, I flew over the Chamatte mountain with an altitude of 3.300 metres MSL. Amazing as I took off at 220 metres MSL. 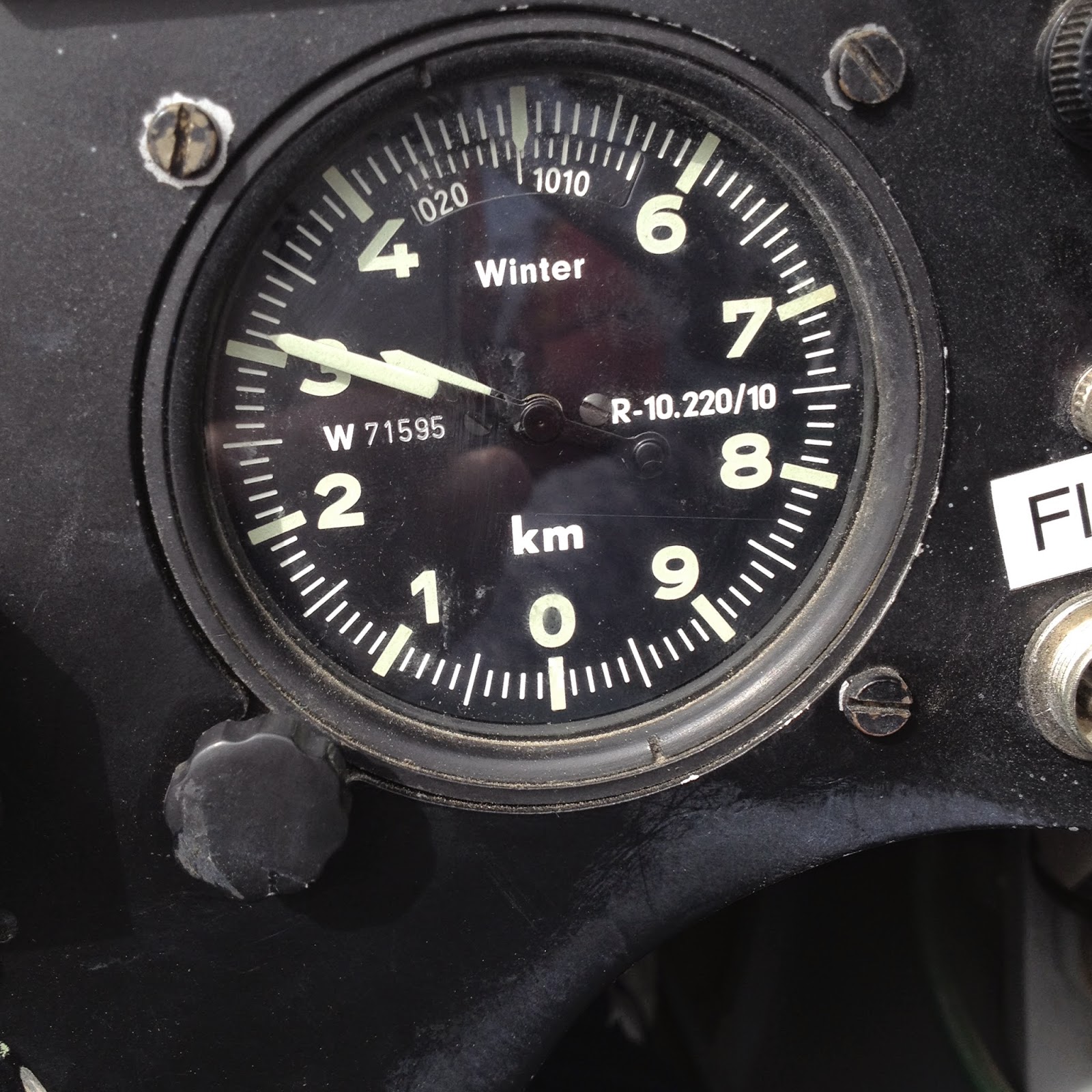 I enjoyed the flying so much today and nearly stayed 5 hours in the skies and it was 6.30 pm when I landed again. A truly amazing day !

We don’t like to fail and that’s why Jean Magne and me immediately undertook a second attempt to get high in the mountains.
This time it worked out well and we performed a exceptional flight achieving an altitude of more than 3600 metres MSL

Something every glider pilot needs to do at the beginning of the season is the annual chack flight. I paid my annual fees to my flying club in Fayence (France) and asked Fayence veteran Jean Magne (83 years old but a very fit man and since more than 50 years a flying instructor) to go for a nice checkflight with me in the mountains. We took the Duo Discus of the club and prepared for a mountain flight.

However, the airfield of Fayence has some particularities. It is located in the Southern Alps but also relative close to the French Mediterranean coast, meaning it is sometimes hard to get out of the so called local area. That means, getting over the Mount Lachens at 1700m MSL.

The Fayence airfield is located at 220m above sea level. However, we failed to get out of the local area. We never climbed higher than 1100m on our 37 minutes flight.

Too bad. So I took some pictures/videos of the local area and made a selfie of Jean Magne before flying back to the Fayence airfield

Springtime ! Today we had nearly clear skies, a little bit of wind coming from northern directions and a reservation book in the “Black Mountain” club (Limburgse Vleugels) which was not to well filled. Reason enough to go for a spring flight. I contacted my Belgian friend Ludo and we booked the OO-CIR (Cessna 172) for a couple of hours. Our initial plans were to fly to the coast (Midden Zeeland), but we decided to go for Bitburg in Germany.

After a short preparation of our trip, we opened the hangar doors and prepared for take off.

Shortly before noon, we took off on runway 03 and headed south. We had a minor radio problem as we couldn’t get hold of Brussels Information on 126,9. That’s why Ludo (who flew the first leg) made some 360 circles overhead Genk prior to continue our journey. But the problem was quickly solved and we contacted Brussels Info to activate our flight plan.

The TMA of Liège is nearby and we contacted Liège approach to ask for a crossing clearance, which was immediately obtained. A couple of minutes later, we flew over the Meuse river in the direction of our first navigation point: the VOR of LNO, a bit south of Liège.

From there, we entered into the Belgian Ardennes slightly below 3000 ft. At our left, we saw the airfield of EBSP (Spa) where we watched out as they were paradroppings taking place as usual. Nothing to worry about however and we flew over the highest hills of Belgium. Below us , the landscape has been changing a lot, we were now flying over forests and hills.

Time passes quickly and some time later, we contacted Langen Info for announce we were going to enter German airspace. Although English is the official language, you tend to hear a lot of German communication on the Langen Info frequencies.

The next turning point comes in sight, it is the NTM VOR. The Bitburg airfield is located just south of it. The quality of the radio transmissions of the Bitburg tower were quite poor (as as the person in the tower had a towel over his microphone). There seemed to be not too much traffic around and after a short circuit, we landed and parked our C172 in front of the tower.

After paying the local taxes, we went to the local restaurant and tried out the “Goulash Soup” which tasted perfect (lots of meat in it). After enjoying an expresso, we filed a new flight plan and simply inverted our flight road. We checked the meteo and took of heading north. The only difference was that this time, I was acting as PIC and Ludo was on the passenger seat.

Whilst the flight, we have been testing out new Serengeti glasses. The optician Bruyninckx store in Hasselt, where I was last Saturday lloking to buy a pair of Serengetis , was so friendly to give me to pairs with me for this flight, just to test which one suited best. I tried as well the polarized one and the non polarized one. Both of them were fine and way better than the Prada I have now. I nevertheless will opt for the non polarized version (Drivers Gradient), which proof to be more practical when I’m flying a C172 with glass cockpit.

We crossed again the Ardennes and the Liège TMA prior to land in our beloved “Black Mountain” airfield in Genk.