Being an experienced private pilot, one can just fly around the local airfield or flying to the same airfields all the time (which gets boring quickly) or one can try to do something new and exciting. That’s how I decided that we’d go flying with our 7-month-old son. He has already joined us as a 4-month-old baby for a regular flight to Ibiza, Spain (which went remarkably well), but this is something else. The question which came to my mind was whether it is safe and wise to take a little baby with us in a Cessna. One thing was for sure, his stroller fitted on the backseat. I googled the subject and did not find anything against taking a baby on board of a Cessna, it seems several private pilots did so before.

ind anything against taking a baby on board of a Cessna, seems several private pilots did so before.

Being an experienced private pilot, one can just fly around the local airfield or flying to the same airfields all the time (which gets boring quickly) or one can try to do something new and exciting. That’s how I decided that we’d go flying with our 7 month month old son. He has already joined us as a 4 month old baby for a regular flight to Ibiza, Spain (which went remarkably well), but this is something else. The question which came to my mind was whether it is safe and wise to take a little baby with us in a Cessna. One thing was for sure, his stroller fitted on the backseat. I googled the subject and did not f 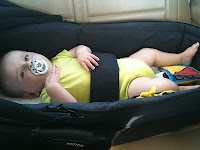 ind anything against taking a baby on board of a Cessna, seems several private pilots did so before.
This time we intended to take him with us in a Cessna 172 for a weekend flight. My original intention was to fly on the weekend from July 3rd to July 4th 2010 from Zwartberg to the North Sea island of Juist ( that’s a flight from some two hours). On July 2nd , when I was checking weather reports, I noticed that the weather outlook for Juist was “Thunderstorms” and “rain”…. so I had to change plans. The only place within two hours reach where the weather seemed to be fine on Saturday morning according to the professional maps of the German weathersite , seemed to be the city of Kassel in Germany. Ok, this means we’re not heading north to the sea, but east to Kassel 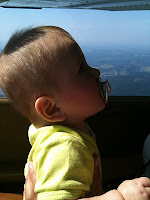 On tripadvisor , I found a hotel with strong references in Kassel, named Palmenbad I contacted the hotel and as they were very friendly, they promised to arrange us a taxi to pick us up at Kassel airfield in the morning of Saturday July 3rd. Everything seemed to run well, there remained only one item to solve: the problem with my Garmin GPS battery.I encountered a small problem with my Garmin GPSmap 495 of which the battery stopped working recently. As I couldn’t find a new battery in time, I wanted to use the cigarette lighter of the Cessna…but that one seemed not to work either, I learned. That’s why I contacted a grand-nephew of mine, Jacques Allard, of whom I recently discovered he’s also a private pilot on facebook. And yes, he used the same kind of Garmin GPS. That’s good news. Haven’t seen Jacques for nearly 40 years, I drove to his house in Kortessem, Belgium 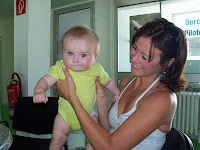 on Friday. Both of us have grown up since we met as kids. Jacques was in a hurry although that evening and I picked up his Garmin battery. Thank you, Jacques !

After checking the latest weather reports early on Saturday morning, which confirmed that Kassel seemed the best place to fly to, I filed a VFR flightplan with Belgocontrol. As the summer of 2010 is an extraordinary hot one, which temperatures expected to soar to 35°Celcius on July 3rd, I decided to take off early in the morning. We drove around 8am to the airfield of Zwartberg in eastern Belgium. At that time, nothing is going on on that regional airfield and we started packing our plane. 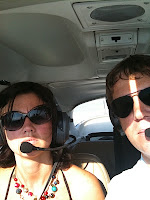 The stroller of our baby fitted perfectly onto the backseat of the C172 and my little son seemed not to dislike this early morning experience. I filled up the tanks of our plane and by 9am we took off, heading east to Kassel. The flight started somewhat bad, as the radio seemed not to work properly, the local airport was still closed, that’s why I couldn’t perform a radio check. I switched to Brussels Info on 126,9 but they couldn’t hear me (neither did I hear them). Making an international flight through several CTR’s, that’s bad news. Therefore I switched to our second radio but couldn’t hear them neither. I wondered what o do now. If I can’t establish radio contact and thus can’t activate my flight plan, I can’t impossibly continue our journey. Therefore I made another 360 around our local airfield at 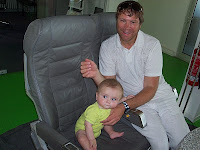 some 2000 feet altitude and I changed frequencies to Maastricht Tower (that’s the nearby CTR for which I need a crossing clearance) and checked all the radio buttons and fuse again. This time, everything seemed to work fine as the dutch controller responded: ” Go ahead, Oscar-Oscar-Charly-India-Romeo”. He provided me with a crossing clearance and we headed 270°.

After less than 10 minutes we passed the Dutch control area and we arrived in Germany. I contacted Langen Info. They seemed quite busy and I had to wait a while before they answered. No worries although as I remained out of controlled areas. We passed the military base of Geilenkirchen (closed for the weekend), we saw Cologne on our right and slowly, the flat landscape changed into a hilly one. After a prosperous flight, which our little baby sleeping all the time and whereby all the communication were made in English, we arrived at Kassel (Calden) airport. One of the reasons, I choose this airport was because their tarmac is some 1.500 meters long. 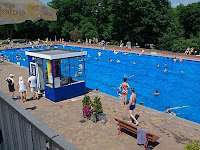 Which such a warm weather, this is exactly what I like. We made a smooth landing. The local staff proved to be very friendly as they parked our plane in a nearby hangar to protect it from an expected thunderstorm on Saturday evening. By that time, our taxi arrived and we were driven to the Palmenhotel in Kassel.In this hotel, every room got an individual design, ours was “Picasso”. All the furniture was in some way Picasso related. Anyway, as the weather was still hot and sunny, we went to the nearby “Freibad” for lunch and swimming.As our little baby enjoys apparently playing in the water, we stayed most of the afternoon in the Park around the swimming pool. What a splendid day. 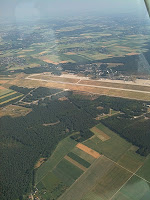 We had dinner that same evening on the hotel’s terrace. Dinner was excellent (Italian kitchen) they had several specials. Their “filet pure” was huge and of an outstanding quality. They recommended us wines with the meal. The light red wine I ordered became a rather heavy one, but I have to admit that it fitted perfect with the meal I had. We had a full meal (aperitif, starters, main course, wine, dessert). The young owners proved to know to be very friendly people and we had a long chat with them before going to bed 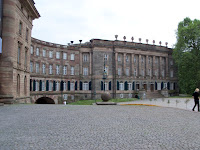 is located near the park (largest of Europe ?) which was really nice. In the nearby park, their are castles and museums. Wilhelmshöhe Palace, above the city, was built in 1786 bylandgrave Wilhelm IX of Hesse-Kassel. The palace now is a museum and houses an important collection of Graeco-Roman antiques and a fine gallery of paintings comprising the second largestcollection of Rembrandts in Germany. We visited these museums and we were not disappointed. Next year, the “Documenta” will be organised in Kassel and every art lover in Europe will headthis way. It is surrounded by the beautiful Bergpark Wilhelmshöhe with many appealing sights.

By Sunday afternoon, we decided to fly to Belgium again. The weather proved to be excellent, no thunderstorms around, only some cumulus clouds. There’s not much traffic around Kassel and by 4pm we took off. Our baby fell immediately asleep again and we had a prosperous flight back to Zwartberg. This time, I skipped the VOR’s on the road and took a direct flight. When I landed, my mother waiting for us on the terrace as she was very worried that something would happen to us. Nothing to worry about, everything went fine. The treasurer of our flying club, Helmut, came to say hello to our little baby. End good, that’s all good. And that’s how the first flight with our baby ended. Simply perfect.