Skip to content
A formal welcome for the European aviators was setup on August 9, in presence of multiple TV and radio crews. Georgian State Minister for EU and Atlantic integration David Bakradze as well as Giorgi Chogovadze, head of the Georgian National Tourism Administration held warm speeches as Georgia feels itself as a part of the European house. A further speech was held by Guram Jalaghonia, head of the Civil Aviation Agency of Georgia, who’s team helped a lot to facilitate flying in to Georgia was private pilots
We distributed the rare bottles of “Chateau de Schengen” wine we brought from Luxembourg. This was highly appreciated as Georgia is preparing to join the European Union. 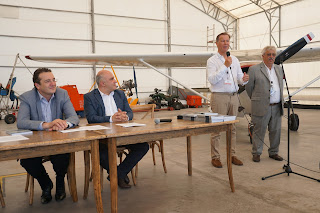