Skip to content
Whilst my recent trip in the US, I very much became passionate with the idea of owning a plane due to the discussions I had with the other plane owners in our group. I’ve seen that the spouses of our fellow travelers in the US are way more involved with the planes of their husbands in comparison with pilots renting a plane. Further, owning a plane gives a new dimension to flying as you’ll get a much more profound knowledge of your plane. Just to let you know the idea has been running around my mind for quite a while. In my opinion a Cessna Skylane (182) would fit best. It is reliable, quite forgiving and allows you to travel at a speed of some 135 kts or 250 km/h (some 30% faster than the Cessna’s Skyhawks 172), due to its six cylinder variable pitch engine.
So, whilst reading my Ipad in the evening prior to go to bed, I stumbled upon an add for a Cessna Skylane 182 at the Chambery airfield in France. This machine looked very nice, not too old (year 2000) with a total time of 1450 hours. 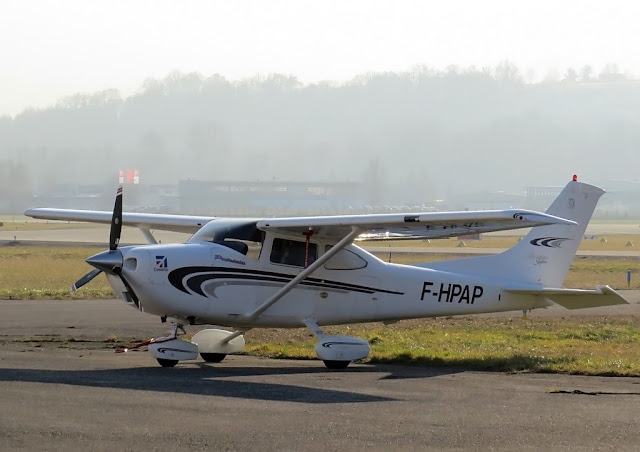 I have been contacting the French owner and learned he had this plane for one year, but wanted to buy a bigger machine and that’s why he’s put it for sale. Out of interest, I have been researching the legislation on engine potentials and maintenance requirements, TBO’s and discovered that there’s a huge difference between France and Luxembourg where I live.
The engine of the Cessna 182 has a potential of 2000 hours before a TBO (Time between overhaul – abbreviated as TBO or TBOH – is the manufacturer’s recommended number of running hours or calendar time before an aircraft engine or other component requires overhaul.) TBO’s are quite expensive as the engine needs to be taken apart and costs easily 30.000€ for this kind of plane.
I learned as well that the Cessna 182 has besides 2000 hours to a TBO and a calendar limitation of 12 years. The difference  between France  and Luxembourg is that in France, one can get a 20% extension of the hours flown, meaning the engine can be used till 2400 hours, but one cannot extend the duration of 12 years. In Luxembourg, one cannot go over 2000 hours prior to a TBO, but you can get a 50% increase of the calendar lifespan (meaning from 12 up to 18 years), whereby every year 10% is deducted from the potential hours of an engine.
12    2000
13    1800
14    1620
15    1458
16    1312
17    1180
18    1062
As a pivate pilot, it seems to me the Luxembourg legislation is the most appealing one. I have never flown 100 hours a year, but rather something between 30 and 80 hours a year on avergae over the last 25 years. Furthermore, there are several maintenance directives causing that it is not a good idea to postpone a TBO once the 2000 h limit has been reached. That’s why it seems more attractive to spread the limited number of hours (TBO) over more years
Summarized, the here above example of the French Cessna 182 Skylane would need a TBO right away if registered in Luxembourg as all of its hours (1450 of 1458) have been used in its 15th year of operation
Even according to French legislation, the motor seems to be at the end of its 12 year lifespan, which likely justifies the price asked for.