I’m leaving shortly for the 4th time to the USA for a flying adventure. Together with a trusted fellow pilot from Belgium, Ludo Holtappels, we’re going to explore during the first half of October the American Southwest by the air in a rented Cessna Skyhawk (172). There will be plenty of adventure (mountains, deserts and National Parks) in Colorado, Arizona, Utah and California.

Autumn is a beautiful time to fly, no matter where you are. But the western USA provides an especially rich diversity for touring by plane: cooler mountain air, brilliant fall foliage, sculpted canyon views enhanced by lower angles of light and more.

We’ll fly from Europe to Denver, where Ludo has to pick up his american flight license. From there, we’ll head to Grand Junction, where we’ll pick up our Cessna Skyhawk 172SP. We’ve booked both of us a so called “mountain clinic” in the Colorado mountains, likely bringing us to the ski resort of Aspen. It is Ludo’s first time in the US and although I have been flying in the Rocky Mountains on a couple of previous occasions, it seemed us a good idea to spent the first two days of our flying adventure with some advanced training. One is never too old to learn especially as we will fly over areas where the minimum safe altitude is 16000 feet, meaning we have to follow flight paths in the valleys.

On Friday Oct 2nd,  we’ll first team up with the 2 Roberto’s from Uruguay (we’ve been with one of them on a previous flying adventure from the USA to Mexico back in 2008) and the fall migration tour organizers, Marisa and Collin Fay of Parkwest air.

Together we’re flying with our 3 planes from Grand Junction via Leadville (landing and lunch at 10.000 feet scheduled, amazing place, it is the highest airport of the USA) to Fort Collins-Loveland. We’ll stay at Estes Park (A popular summer resort and the location of the headquarters for Rocky Mountain National Park), where we’ll stay at the famous Stanley hotel where we’ll meet with other pilots coming pilots from near and far to the glorious skies of the American southwest.

All together, we’ll be with a team of 26 persons and 12 planes (Piper Seneca, a Mooney, several Cessna Skylane 182’s, a Bonanza, a Murphy Moose, a Twin Cessna, a Piper Malibu and a Cessna Centurion) to explore the southwest of the US. This tour has been prepared by Marisa and Collin Fay, who form together Parkwestair. Most of the pilots joining are coming with their own planes from the North-eastern states of the USA with exception of the two Roberto’s joining from South America and Ludo and myself being the only Europeans.

During the weekend of October 3 and 4, we’ll have extensive briefings and explore the region of the Stanley hotel and get to meet our fellow pilots (of which I know several ones).

This colonial hotel built in 1909 is so famous because of its panoramic views of the Rockies, but also because the Stanley hotel  hosted the horror novelist Stephen King, serving as inspiration for the Overlook Hotel in his 1977 bestseller The Shining.(horror movie with Jack Nicholson)

On Monday morning October 5 t, the flying adventure starts and all of us take off with their planes. Here’s the list of National Parks we’re going to visit during our flying adventure, whilst many other parks will be flown over 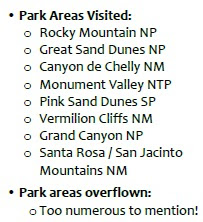 Marisa Fay says: “Trip highlights include an autumn tour of the Rocky Mountains NP, sledding the sands of the Great Sand Dunes NP, a stroll atop the Grand Caynon, a step back into Anasazi times in Caynon de Chelly NP, and much more”

This so called “fall migration” tour will start on the Front Range of the Rocky mountains, continue to Colorado’s Great Sand Dunes and the red rock canyon country in Arizona and Utah, than conclude the desert skies of Palm Springs in California.

The scenery is absolutely and completely spectacular and offers some new ways to appreciate this expansive countryside.

The airports we’ll visit are all quite high in the Rockies, reason to refresh our density altitude courses

Our flying adventure brings us to Palm Springs in California by October 12th. For Ludo and myself it is not over yet as we’ll have to fly our rented Cessna back to Colorado on the 13th of October (that will be a heavy and lengthy day) and return the plane.

It is my forth trip in the USA (first one was exactly 10 years ago), but the longest one. It must be some  2200 NM (some 4074 km) in total. This american adventure will prove to be an excellent preparation for the long range flying rally we’re setting up from Western Europe to the Caucasus in August 2016 with Jean Birgen.

By October 16th, we’re on our way back to our work and family in Europe.