In preparation of our visit to Georgia, I got confronted with the fact that you cannot just rent a plane in Georgia as elsewhere in the EU, by just showing your flight license. In Georgia, you need to have a local pilot sitting next to you.

Although located in Europe, Georgia is not (yet) part of the EU. That’s why I contacted the Georgian State Minister for EU and Euro and Atlantic integration, Mr. David BAKRADZE and addressed this problem to him asking to for meeting to explain our plans with regards to the rally for European private pilots we are planning to setup from western Europe to Georgia in September 2016. (1st long range tourist rally to Georgia)

The Georgian government is known to rapidly modernize the country and foster EU integration. But I was surprised anyway that their State Minister answered me in person per email that he was “willing to give it a go” and so we agreed to meet on August 4th at his office at Ingorovka Street at Tbilisi.

He furthermore provided me with some email addresses of other key persons in the Georgian government administration such as e.g. the Georgian civil aviation agency etc… I contacted all of them and also here, we got prompt responses and were confronted with an openness of mind which you rarely encounter. Amazing country, Georgia !

We did not know what to expect honestly in advance of the meeting. Jean Birgen brought some papers and news articles of previous rally’s he has been supporting over the last 28 years and explained the private pilot rallies he was involved in.

State Minister David Bakradze proved to be a young, dynamic and very charming person. He warmly welcomed us at his office. We discussed for almost an hour about general aviation topics.

Georgia is a country where new airfields are constructed. For example, in Mestia, in the Caucasus a mountain airfield has been recently opened.

He seemed to have a profound interest in our story and proved to be a good listener. State Minister David Bakradze explained us that he sees the benefits of having the general aviation developed in his country.

The flags in the Minister’s office show clearly how the Georgians see themselves, being a full EU member and a NATO member.

The 2016 long range tourist rally to Georgia we’re planning to setup will bring some 20 small planes and a group of some 40 to 50 persons to Georgia from various European countries.

Some pilots will fly all the way with their planes from Western Europe to Georgia (some 2500 NM + 2500 NM return), some others will try to rent planes in nearby Turkey and some pilots might be interested to rent a plane locally in Georgia.

Minister Bakradze supports this plan and was happy to hear that the contacts he provided us with were responding so well. He kindly mentioned he was to give them an additional call in advance of our afternoon meetings with the Georgian Civil aviation agency to express his support.

Summarized , the meeting with State Minister Bakradze was a complete success and only further strengthens our positive impressions of this beautiful country. 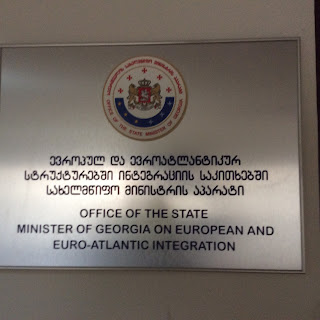