Skip to content
Every year, the UPL ( Federation of Luxembourg private pilots) and my flying club Aerosport organise a navigation refresher. This is a fly out whereby the organizers, Bernard Frechen and his team, puts out a navigation with three legs. The club planes are typically occupied by three pilots, randomly chosen out of the participants. Every pilot has to fly one leg of this exercise.
Last Thursday, there was a well attended (some 40 pilots) briefing in the Aerosport clubhouse. The announced plan was to fly south west, to the airfield of Auxerre in France for the first leg. From there, the second leg would bring us in Southern Germany (Bremgarten)  and the last leg was a flight back to Luxembourg. The weather outlook for this exercise on Saturday May 25th was not so good. It therefore did not surprise me when we got on Friday afternoon an email with an alternative routing, this time heading to northern Germany. 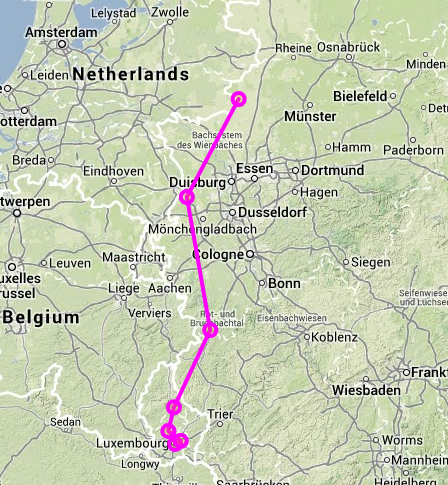 On Friday evening, I started preparing the flight’s first leg. I had to fly the first two hours from Luxembourg’s intl airport to EDLS, which is located in northern Germany. As I haven’t been flying a lot the last couple of years, I prepared myself in detail for this flight. the more while my portable GPS (Garmin GPSMap 495) seemed not to work on batteries. I took me till 1.30 am preparing all details of my upcoming flight. At least, I would be well prepared.
On 7am, I got out of my bed and headed for the airport where I met my fellow pilots. One  is Irish and his name is Christy Reynolds. He would sit next to me for this first leg. The second pilot is Guido Peterzelka, born in Bangkok, but with some Czech and German roots. We checked the weather reports, filled the fuel tanks and by 08.30am we were in the air, heading north.

The spring of 2013 is a very dark one, it seems to rain all the time…but today, we were lucky, the sun was shining 🙂 Jippie !! Flying with 3 pilots is easy: there’s a permanent exchange of ideas in the cockpit.
Guido seemed to be very (very) well equipped. He has all the latest tools one can imagine. I relied very often on handheld GPS devices, but Guido used his Ipad as a navigation tool. He does so with a sat receiver, which connects via bluetooth with his Ipad. His Ipad was strapped around his leg, very practical.

I left ELLX via the north (exit Alpha) prior to point my VOR to DIK (Diekirch). I climbed out till 5500ft and crossed the German border, switching to Langen Info. From there, we flew over EDKV prior to head for the IFR reporting point Netex. I tried to avoid watching the GPS in the plane and focus purely on VOR and watching outside, bit with the Düsseldorf TMA so nearby, it seemed a bit tricky. that’s why I asked a clearance to cross the Dusseldorf TMA. The air traffic controller was very helpful and I was allowed to fly directly over MönchenGladbach, although I was asked to descend to 2000 ft. Doing so, saved me some 10 minutes I guess and after a flight of 2h20min, I landed our C172 in EDLS. Mission completed. Time for a German lunch (always heavy) 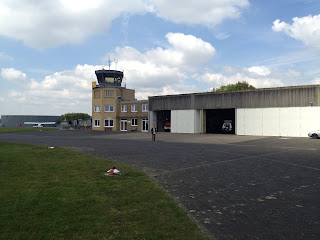 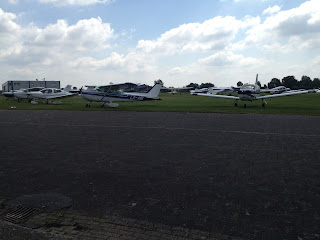 The Germans must have been surprised, seeing an invasion of Luxembourg registered planes on this small airfield as I guess we ended up being with 10 planes or so. 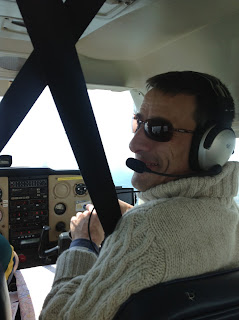 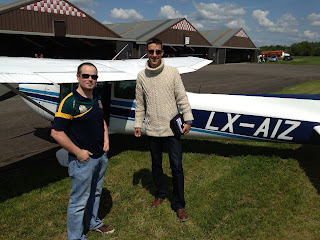 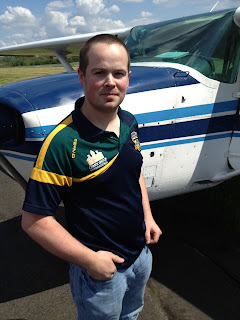 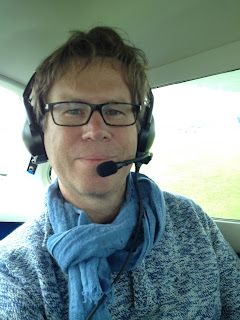 After Lunch, Christy took over and he flew us to EBSG, that’s Saint Ghislain in western Belgium. This leg was much more complicated than mine. He had to avoid several prohibited zones (P5 – bombing area), the nuke airfield of Kleine Brogel (EBKB) etc… Christy did a perfect job passing all these zones and landed us safely in Saint Ghislain. Time for dessert…lemon cake

The weather deteriorated a bit (some showers) and so our third pilot, well equipped Guido decided to wait a bit before taking off and fly us back home to Luxembourg. That proved to be a good decision and I think we’re the last crew to arrive back in Luxembourg. Guido opted for an entrance via the south and we were happily surprised, when we received a straight in approach to Luxembourg’s airport with a scenic flight over Luxembourg city.

The nav refresher organizer, Bernard Frechen, had a nice surprise… a lunch meal.

I lost a bit my appetite for flying and did not feel so comfortable anymore flying around,  but this event proved to be the perfect exercise. I’m in flying mood again.

I furthermore met two great fellow pilots, Guido and Christy, with whom we could talk all day long about flying, planes, techniques etc…. superb ! I enjoyed every moment of this fly out. More activities to follow, hereunder are some more pictures which were taken by  Guido 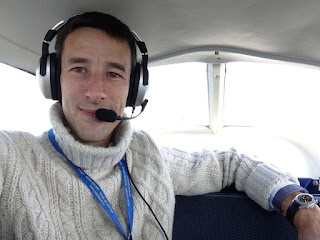 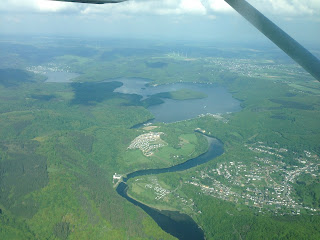 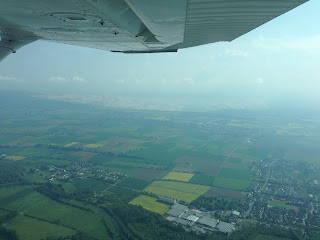 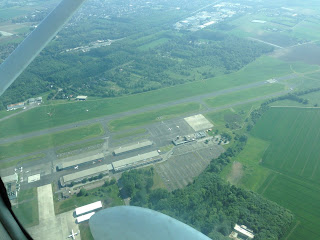 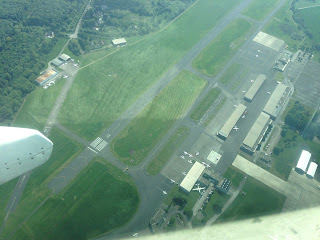 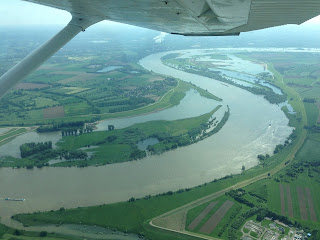 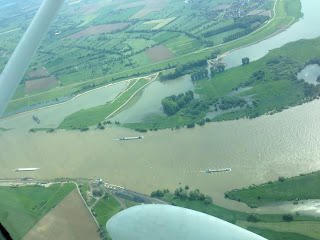 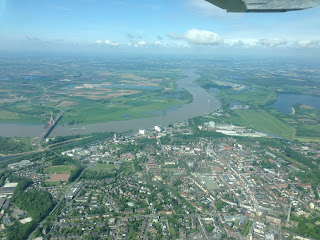 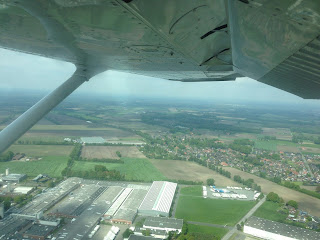 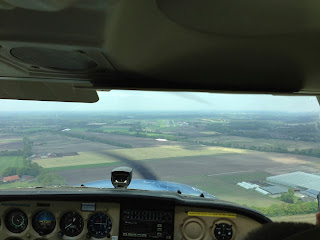 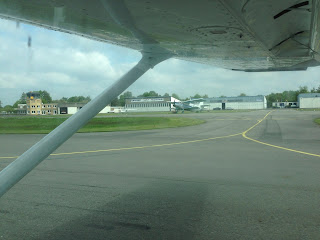 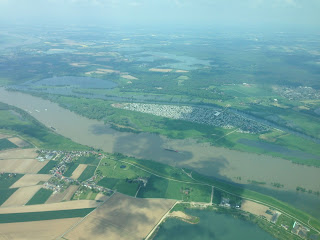 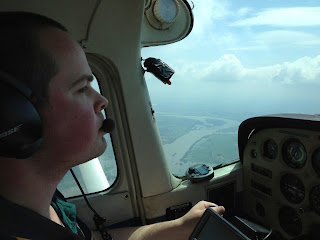 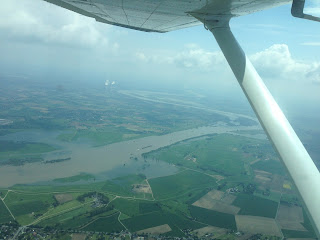 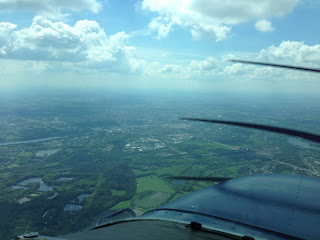 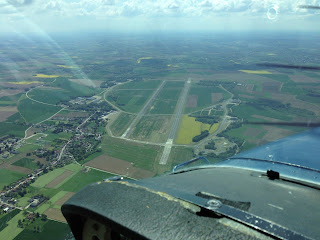 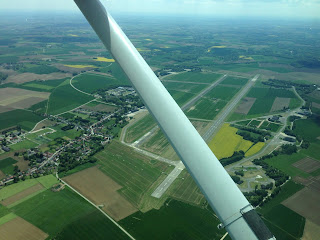 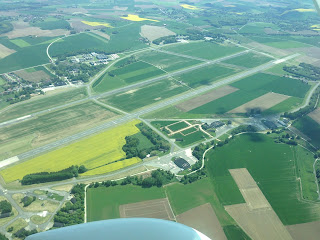 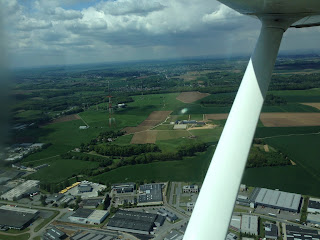 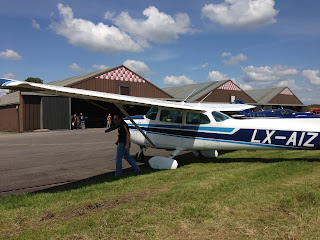 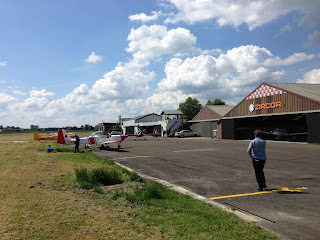