I started again with gliding this summer. I practice gliding since 1979, the last years I exclusively do so in Fayence. This is a commune in the Var department in the Provence-Alpes-Côte d’Azur region in southeastern France.
Fayence is one of a series of “perched villages” overlooking the plain between the southern Alps and the Esterel massif, which borders the sea between Cannes and Saint-Raphaël. Fayence is a charming old Provençal village popular with tourists. The village is located on the road to Mons, which later on joins the Route Napoléon (linking Nice to Grenoble through the Alps).
Some high-standing resorts have settled nearby the village in the recent years: the Domaine de Terre Blanche at Tourrettes, Var and Domaine de Fayence attracting a foreign clientele.  The airfield is located 1.5 kilometres (1 mi) south of Fayence and Tourrettes.It is home to a large gliding club, the Association Aéronatique Provence Côte d’Azur (AAPCA) and to three microlight schools. Runway 10L has two small tarmac landing strips for the exclusive use of gliders.
The aerodrome of Fayence-Tourettes (ICAO: LFMF) is one of the only airfields in Europe where one can practice gliding the whole year round…even in winter time. Amazing !

Here’s a view from the village of Fayence, which overlooks the airfield. 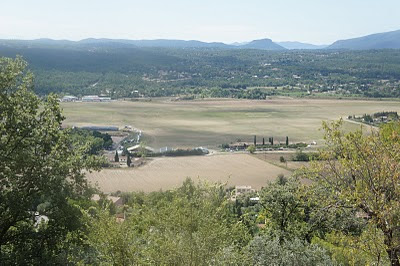