Skip to content
My mom, who’s living in Hasselt, Belgium, uses to come from time to time to visit us in Luxembourg. This time, I suprised her whilst announcing that I would come to pick her up at the nearby airfield of Zwartberg, Genk in Belgium. 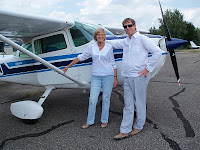 I booked a Cessna 172 at Aerosporton the last Friday of June, I intended to fly north to Zwartberg. The weather outlook was excellent for a VFR flight (Ceiling and Visibility ok) and I filed my flight plan via the website of Belgocontrol

My GPS did not work (battery problem) , neither did the cigarette lighter of the LX-AID, that’s why I prepared my flight in the old fashioned way, by flying from radio beacon to radio beacon. After a smooth take off in Luxembourg, I headed north at 2000 feet to the VOR of Diekirch. As I flew quite low, I could perfectly see the beacon of Diekirch. After Diekirch, I continued my journey north directing to the next radion beacon of OLNO, south of Liège in Belgium. In the mean time, I called Brussels Info at 126,9 and announced my plans. As I had filed a flight plan, they already knew about my intentions. 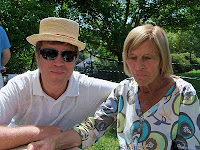 Having passed OLNO, I called the tower of Liège asking for a crossing clearance. There seemed not much traffic around this Friday morning and I immediately obtained a clearance at 3000 feet. Having past Liège, I remained on their frequency until I was at Tongeren, where I switched back to Brussels Info. A couple of minutes later, I approached Genk Zwartberg and prepared for landing. The whole flight took me some 50 minutes (compared to 2 hours by car or 4 hours by train).

EBZW of Genk Zwartberg is the airfield where I learned flying long time ago. It is a very pleasant airfield where several sports can be practiced beside motor flying. There’s a quite large gliding section (soaring), there’s a full parachute club, some guys are playing with their teleguided planes and there are some local companies present on the airfield. And there’s of course a good atmosphere over there as long as I remember. 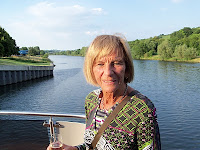 As soon as my mother arrived, I filed a reverse flight plan and I prepared a flight plan back to Luxembourg. My mom is worried and asked “moms” questions such as : “Have you not forgotten to fuel the plane ? and “Are you sure you know how to get to Luxembourg?”. She was taking place on the co-pilot’s seat and some minutes later we took off heading south. The flight went remarkably well. The only difference is that I gained some minutes by heading directly to Luxembourg, skipping the VOR’s. Above Mersch in Luxembourg (Bravo 1), I called Luxembourg tower and they guided me to Bravo 2 (above the Kirchberg) where I had to make 360° circles because there 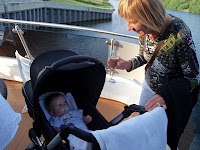 was many traffic at that moment. That made me loose 10 minutes, but after being cleared for landing, everything went fast. Mom was happy to be out of the plane, I think.

That evening, we went to a cruise on the Moselle river in Luxembourg with the whole family as the Flemish club in Luxembourg existed 30 years and that ought to be celebrated. Weather was excellent, it was even warm and so we had an enjoyable evening to terminate with in Luxembourg.